By the mid-1970s, the company changed its name to Fairfield Communities, Inc. and the number of resorts grew — which included today’s Wyndham Resort at Fairfield Glade in Crossville, Tennessee. (Resort Trades’ home office is in Crossville….Coincidence? Perhaps not; but that’s another story.)

Although he was chairman of ARDA from 2013-15 and easily approachable, Wyndham Vacation Ownership’s President & CEO Franz S. Hanning RRP* and I never had the opportunity to chat together until recently. I found the leader of the world’s largest timeshare company, and one of the most influential industry icons, to be a man who genuinely cares about others and who provides leadership through team-building and by example. “I’ve never been afraid to hire people who are smarter than me,” he says wryly. “Hire the best people. If they happen to be smarter than you, that’s what you want. Then step aside and give people authority.”

Hanning had been with the company’s predecessor, Fairfield Resorts, since 1982, where he began his sales career at Crossville, Tennessee’s Fairfield Glade, a beautiful retirement community spread out over a mountaintop on the Cumberland Plateau. “Fairfield offered retail land too, but timeshare was my original focus as I began working my way up the ladder.”

Eventually moving to Williamsburg, Virginia, where the company opened its first timeshare-only resort, his rise included never skipping a rung, but thoroughly learning the ropes as he progressed through the positions of sales manager, regional manager and vice president of sales. His winning attitude, inspirational leadership and success earned him a notable reputation. So much so, that when Fairfield went through Chapter 11 in 1990, he was put in charge of the only surviving sales department.

He moved to Orlando, Florida to take over the Florida region in 1996, and the following year, the company relocated from Little Rock, Arkansas to Orlando. Hanning was once again climbing the ladder, occupying the position of Chief Sales and Marketing Officer and, subsequently, becoming Chief Operating Officer (COO). He became Chief Executive Officer (CEO) in 2001 when Fairfield was acquired by Cendant Corporation, where he has remained for the past 15 years.

Hanning reminisces about the earlier Fairfield Resorts days to explain how Wyndham became and has remained a leading company. “When all the branded hotel companies like Marriott and Disney came into the business in the mid-80s, we were at a disadvantage. They were already household brands, while the name ‘Fairfield’ was generic. We felt as though we had to strive to be better and more innovative to compete in the marketplace, and this same spirit of hard work and commitment to excellence has driven our success over the years.”

This dedication to remaining on the leading edge fared well for the emergence of Wyndham once the dust settled after the change of ownership. Hanning’s passion for excellence – his belief in engagement and team effort – has indelibly stamped an organization of around 17,700 employees.

Wyndham continues to be outstanding innovators in the industry, becoming the largest vacation ownership company in the world; one which has a global imprint with resorts in Brazil, Australia, New Zealand, Thailand and Fiji.

“For all of us, attracting the next generation of owners is important,” says Hanning. “This plays into our innovative nature as we push the envelope on what our product looks like as we attract new owners while expanding our technology in the digital space with social media. “Our last chapter is not yet written,” he adds. “We want to position our company for long-term success, and we are looking to not only grow our owner base, but our domestic and international resort portfolio as well.”

Among Wyndham’s more notable innovations over the years, Hanning mentions two that are making a real impact: “I’m proud of our ‘Ovation by Wyndham’ program. It’s a comprehensive, proactive and uniquely positive approach to help owners seeking to exit their timeshare. We realize we must evolve to meet the changing needs of consumers, and we’re proud to be the first developer in the industry to provide a program like this.”

“We also realize that owners enjoy traveling to destinations beyond beach or ski locations. We have the largest portfolio of urban timeshare which include resorts in desirable cities such as
New York City, San Diego, Seattle, etc.”

He is quick to share the credit for Wyndham’s achievements with his team. “It’s not an individual accomplishment; we’re a great team. We have people who’ve been with our company for more than 40 years and, over time, our team has changed the industry.” 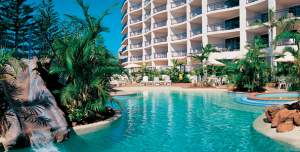 With his capabilities and talents, stepping up to accept the responsibilities of chairmanship of ARDA was a natural fit. At the time of his election to the position, Howard Nusbaum, president and CEO of ARDA said, “We are honored to have Franz serve as our industry leader and look forward to working more closely with him as an advocate for vacation ownership. Franz’s rich background and deep roots in resort sales and management is an asset to our industry, especially at this time of product innovation, market growth and consumer satisfaction. He is the perfect steward to introduce a new generation to timeshare and better vacationing.”

“It’s a position all leaders in the industry embrace,” comments Hanning. “They raise their hands and look forward to being a part of the organization. The work of the association is extremely important, both for professionals in the industry and vacation owners. From ARDA’s advocacy, legislative activity and protection of owners from fraudulent players, ARDA serves a great role. It was an honor to be chairman. And all I can say about Howard is that he is an amazing leader. He and his team do all the heavy lifting.”

What does a day-in-the-life for you look like, I ask? Do the demands on your time often entail sixteen-hour days? How do you ensure yourself of having a healthy work/life balance?

“Sixteen-hour days?” he laughs. “When you’re the CEO, you’re never really off, especially in today’s world with cell phones. Still, I’m a big advocate of work-life balance. It makes a difference. You can see that people will stay a lifetime with companies that give them that opportunity. I’m a poster child for that. I typically travel heavily the first five months of the year. But we have teenagers at home, so I try to make it a point to vacation with my wife and kids.”

He muses for a while to consider how to describe his typical day-in-the-life, but to no avail. “What I love about my job is there is no typical day. With a $3 billion company there’s always lots going on. Whether it’s working on major alliance partnerships or simply routine meetings with my team, I love my job and I love the people. I literally can’t wait to come to work every day. I’m humbled to lead such a great group of people.”

*Hanning (and the author) are Registered Resort Professionals with the American Resort Development Association (ARDA), based in Washington, DC.